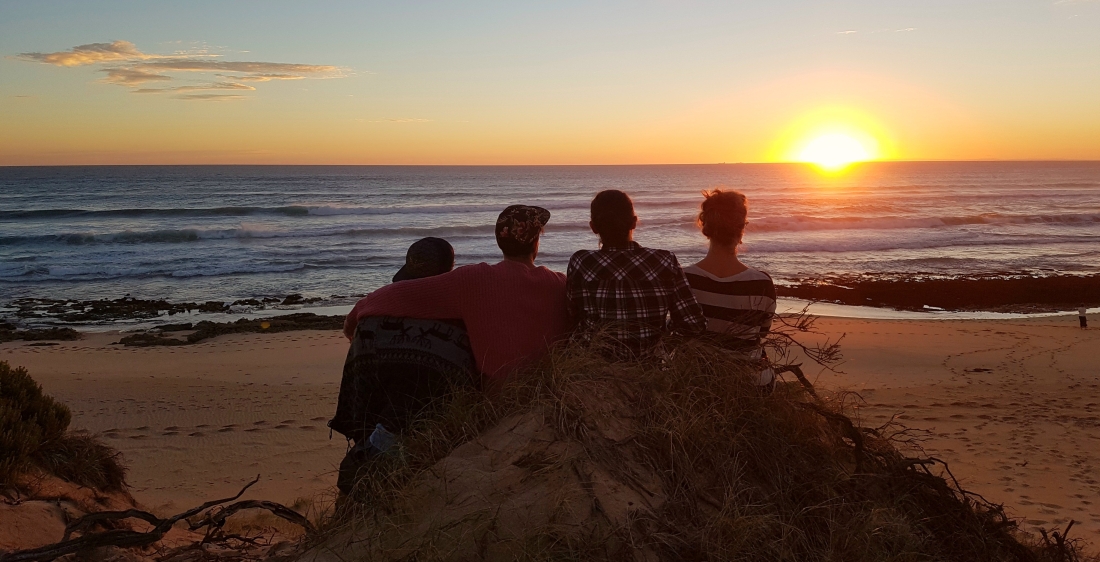 There are almost no buses that ran north along the coast, and what was left was full, so I hitched a ride with my Mum up to Brisbane. I found an old mixed cd I had made when I was a teenager entitled “Groovin Fun Times”, which surprisingly held up to its name.

The highway up to Brisbane is lined with yellow people cut-outs. I know they’re for construction reasons, but they read a little creepy.

Four days I survived off a bowl of complimentary nuts I swiped from a bar and kept in napkins in my bag. My life may have been in shambles but I’ll be damned if I ain’t good at it.

My adorable nieces asked me when I was getting a wife. I always look to a parent in these instances because I’ve been told off before for discussing sexuality in front of kids, but thankfully Keirin answered without even skipping a beat and told them I would rather have a husband. Instead of being at all affronted or confused, Maya simply said, “Ok. Well, then why don’t you have a husband?”, as if the gender of the mate is at all relevant. Rosie immediately got the box and Maya got the brush – it was makeover time. They were going to get me “a gay”. I hadn’t really met kids who were super openly chill with the whole dude and dude thing, so it was pretty amazing to have conversations with an 8 and a 5-year old that I couldn’t even have with a lot of adults I’ve met. Keirin lightly scolded them a couple of times over light remarks regarding gender but I mean like fuck these kids are already doing better than most of the people in government and Maya doesn’t even have her pen license yet so I’m pretty sure they’ll be fine. My makeover probably wouldn’t do much to snare me a mate, but you’d be damned if you tried wiping the smile off my face.

Spending time with the young and lively gave me access to a world I had no idea about, such as pre-teen pop stars. My nieces showed me videos of their favourite young upstarts and it was so bizarre. They’re like dolls come to life to act like adults but singing about dumb shit like school and homework and romance is hoping your mum doesn’t hang around after she drops you off at the park.

While my sister and I were sitting up chatting one night, my niece Rosie came out and adorably begged us to go to bed. She lounged around us while we kept chatting until one point where she placed her hands around Keirin’s glass of wine and said “DRINK THE WINE” in a demanding voice that belied her five years of existence. I expect great things from her.

Went up to the Sunshine Coast to visit my aunt Megs at her valley cabin. Defying the name bestowed to it, the coast poured with rain for the first couple of days, the kind of heavy rain that doesn’t let up. My aunt’s cabin got flooded in so we couldn’t go anywhere. With nothing else to do but get drunk and wait it out, we did our damned best, pushing the couches aside and dancing wildly about to Fleetwood Mac’s Tusk.

To liven things up, we went to visit her neighbour Fi who lives behind her up the paddock, where we sat around playing with her pet snakes. I loved that one of the snakes was named Geoff. Like after he was done draping himself over me he could sit back and inform me on where I went wrong financially.

My cousin Phoebe went on about how men can’t multitask, to which I rebutted. I mean, we have more than one hole for a reason.

Megs always gets to an adorable point of drunkenness where she grabs a set of spoons and plays them on her leg. She thinks it’s a great party trick, but after years of being witness to it, everyone knows otherwise. Naturally, when she turned to me during a large family round of Yahtzee and asked through slurred words if she should get the spoons out, I looked her dead in the eyes, placed a hand on her knee for emphasis and said simply, “absolutely”. The groans of everyone else around the table was thanks enough.

My Aunt Weezy is one of the most effortlessly funny people I know. She has a machine gun wit that I always dreamed of and desperately look up to. While we were standing on the street waiting for a cab home from the surf club, some late night joggers passed us and she yelled out good luck to them and sung Sk8er Boi at a passing skater boy.

My cousins Tara, Jasmin and I went to Aussie World aka the garbage pail kid of theme park highway and it may have had a facelift since the last time we went about a decade ago, but it was still fantastically average:

On the drive down to Brisbane airport my mum and I were so distracted by our road trip chats that we missed the airport turn off and I ended up rushing to catch my flight. It was great road tripping so much with my mum, we’d make a great podcast team.

A lady on the bus from the airport to Melbourne called her sister to rave about her flight. On and on she went listing just about every step in the process of booking a ticket to landing after the flight. I’ve never heard anyone give Tiger Airways such a glowing review before so I’m certain she was a mole.

Being in Melbourne has a familial feel to it, even though I feel displaced. There’s just no way to describe that homely feeling as you sit on the street having a drink with a mate and then a smackhead walks backward down the street past you, twitching his way to glory.

The reason I had stuck around in Aus so long had arrived. It was one of my best friends 30ths and Conor was having a weekend getaway down at his parent’s beach house. There was just no way to pass that up. I was forever envious of those kids in shows who always had a beach house to go away in and now I was one of those kids, as long as I hung around long enough so that it would be weird not to invite me. Whenever this particular group of friends get together we all laugh so much it’s basically exercise. We drank copiously and sat in rock pools at sunset and made a beach shelter from the wind in a dune hole that more resembled a sacrificial pit. We sat by the fire and looked at the stars. We always leave weekends like that exhausted from the cocktail of sun and salt and hangovers and laughing so much. It’s probably my favourite kind of hangover.

Cars are evolving so fast I can barely keep up. My friend Leesh’s car not only reads aloud your text messages, but also any emoji’s used in the text message, resulting in the beautifully delivered sentence “Confirmed hands with medium dark skin pressed together”.

While napping in Ikea on a couch I could never afford, I found $5. I then bought five hotdogs with that $5 and felt like a fucking king. Hours later I would regret that choice, but in that moment I was living.

While deliberating about where to head off to next on my travels I found it hard to ignore a nagging feeling that was floating around my body. Before I left I felt ready but now it doesn’t feel right to leave. Apart from the fact I was out of money, I missed my people in Melbourne so much that I knew I had to stay for a bit longer. Family is family and they will always be there no matter what which is a comfort, but there’s something more powerful in the bond of a family one creates by themselves. There is so much out in the world to see and explore but absolutely nothing compares to the embrace of people who openly accept the lost drunken mess that I am even though they have no blood ties forcing them to keep me around. I’m at a point where I feel lost with what I’m doing with my life but I feel so tethered to this world in the beauty of my friends that I know I need to be with them at this moment. Part of the fun of freedom is making the choice that feels right. If I can find the same about of beauty looking into the eyes of the people I love just as much as I can traversing the landscapes of the planet then I’ll take it. After all, I’m a lazy opportunist and I’ll always take the cheapest option. Traveling is an incredible experience but I felt my health bar depleting, and Melbourne for me is like a fairy fountain in Ocarina of Time, and I need to replenish for a while before getting back on my horse and riding off into the world. Also, no city in the world tolerates my obnoxious dancing like Melbourne does and as Deee-Lite once said, groove is in the heart and I don’t know much about anything but I do know that my heart needs a good groove.