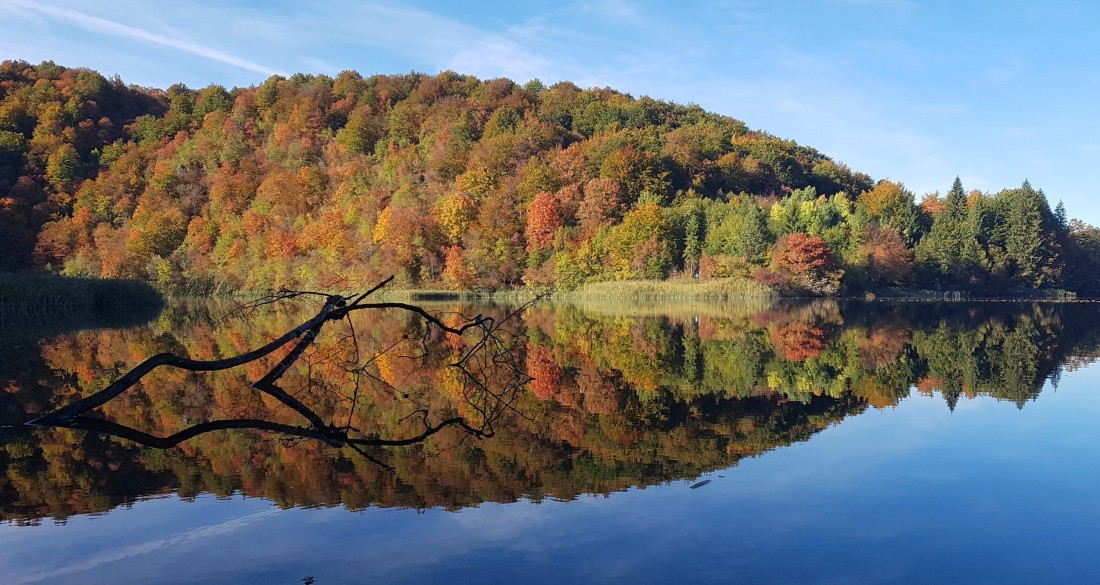 Mark Twain drank scotch every night to prevent toothaches, which as a cheap beer-drinking tourist who can’t afford scotch, I put down as the reason for my early morning trip to an emergency dental clinic in Zadar hours before we were to get a bus out of town. As a result I vowed to drink more scotch whenever possible.

Our host in Rudanovac was a very sweet old man who regaled us with jolly tales of how his wife died years ago and now he has two cats and spends winter alone with them. Our hearts ached for him, and he brought us bread every morning and drove us around everywhere. After a long day of exploring the national park, I fell asleep in the car and as a result he called me an honest man. I don’t know how the two correlate, but somehow it felt like the nicest thing anyone has ever said to me.

At the Plitvice Lakes we went hiking around and came across a woodpecker. It was the first time either Rachel or I had seen one in the wild and it was very exciting. As great as it was to see the little beast vigorously pecking away, it sure did look stupid doing it. What a shit habit to evolve into.

The worst part about tour groups in tourist areas is accidentally being caught up amongst them. Not only are you trapped as you try to navigate your way through the slowly moving herd, the oncoming traffic passes judgement on you, mistaking you for a member. I tried as best I could to give each person who passed us a look to say “I’m not one of them!” but there is no way to know how successful I was.

The Plitvice Lakes were so perfect in their stillness and beauty, they reminded me of the puzzles I used to do all night as a teenager as the crushing pressures of high school life would prevent me from sleeping. It wasn’t something I wanted to be reminded of, but I can hardly blame the lakes for their perfection.

If see one more crowd of people stop in the middle of a walkway to photograph a fucking duck I’m going to push them all in as I pass.

While hiking we came across a swarm of ladybugs flying about. As I approached they enveloped my form and it was beautiful it its whimsy. Until they started biting. I didn’t even know they had mouths. They are also terribly hard to shed. It was nightmarish. We renamed them ladycunts.

On the way to Rijeka I accidentally left a bag of food on the bus. I was sad to lose my cargo but sadder that when the bag would be found they would come across a zip-lock bag of cooked pasta and think that was how I usually lived my life, like some tupperwareless hobo.

Rijeka means “river” in Croatian. To non-natives, Rijeka sounds like a name, but to the locals their town is named River, which loses so much of its potency as a noun.

Our hostel was a boat. They called it a Botel, which annoyed me but they were forgiven for being a boat. It was fun exploring the halls of a ship instead of a building though, and sometimes our room would fall into a lean. If I were a cooler person my thoughts while staying there would have been of that Lonely Island song, but they were only of Titanic.

I met a local in Rijeka who took me to an underground queer party in an old church on the outskirts of town. It was great to be somewhere so full of life outside the tourist hub. There was a drag show and one of the queens did a number with a song about butter and I have never felt so strongly connected to a performance in my life. I made friends with a local girl who called me Aussie Wizard(an amalgamation of my heritage and also my famous name-kin) and when a song came on she liked, her favourite thing to say was “raise the roof” to which I would point to the ceiling, swish and flick my hand screaming “wingardium leviosa!” and we would laugh and laugh. As I was leaving the club with my new friend at the end of the night, we were accosted by a group of local men who asked us if we were gay, to which we said yes. Then he asked why. Then everyone started yelling in Croatian and the atmosphere got very tense and very dark and suddenly we were surrounded by a hoard of young religious zealots. My friend grabbed my arm and we ran out of there before the situation escalated further, which it felt like was very close to happening. Why a group of young homophobes were hanging outside a queer party on the outskirts of town at 4am on a Saturday morning is anyone’s guess. While there is something exciting about the queer culture existing solely underground, giving it a clandestine quality, it is extremely saddening that it is a necessity.

People who hold up foot traffic in confined but heavily trafficked areas to take photos of themselves need to die. Stealing time from another to scratch an itch of vanity is a one way ticket to purgatory. My hate for them is so pure.

Received a $10 credit for complaining about the bed bugs at our hostel in Thessaloniki, so whoever tells you nothing comes from being a nag is dead wrong.

There is an old military tunnel running underneath Rijeka that you can walk through and check out. The information board at the entrance reads, “Why build a military tunnel underneath the city? Why, to keep the residents safe from air-raids of course!” which just seems far too jovial for such a thing.

I got invited to a house party by my new local friend, who came and picked me up at midnight. The party was more like 8-10 people gathering in a tiny apartment drinking what I am pretty sure was vodka and plum juice. A party attendee invited me and my friend back to his house for more drinks, which was around the corner, and we left. His house was actually a very wealthy looking large abode and was also not his but his much older boyfriends who was naked in the hot tub when we arrived. He emerged from his wet throne and directed us to two platters he had made up on the table, one of cheese and olives and the other of an array of drugs, both organised meticulously by someone who had already partaken in at least one of those platters. It was very late on a Tuesday night and it just didn’t seem like the time for either offering really, I mean, we were drinking champagne; with a cheddar that aged? Please. We were then told clothes were optional, so we got naked and drank champagne in the tub at 1am and commenced getting down to business. I had a general note to myself quite some time ago that nothing good ever happens in a hot tub after dark so avoid at all costs, and I disregarded that advice once and paid dearly for it. I should have trusted my instincts and taken the cheese platter to the lounge room and watched the X-Men porn parody they had playing. So out of nowhere a fifth guy showed up to the party. I don’t know much about the nuances of group sex but this seemed like a kind of everyone’s welcome kind of vibe, but the atmosphere changed almost immediately. Everyone spoke in Croatian at this point and in whispers to each other and I got the feeling this extra person was not invited which led me to wonder how he knew what was going down, and even how easily he accessed this wealthy persons large house. They didn’t even seem surprised he was there, just disappointed. It got very awkward very quickly. The older host turned off the hot tub and dramatically took his two a carefully formed platters inside and we were told to leave. On the way out I grabbed a couple of nubs of weed as a souvenir, thanking him the way one would as they take a fortune cookie upon leaving a restaurant. Croatia after dark is a wild ride.

We came across a “Peek-and-Poke Children’s Museum”, and I just feel like that title was not workshopped at all.

In Pula our host, a very sweet man who lives with his fifteen year old dog, was also interestingly a conspiracy theorist. At night he would watch videos on conspiracy theories, loudly, and I would become engrossed with them like an old lady with her daytime soaps. My favourite one was that of Atlantis. Apparently Atlantis, which was flooded by the religious as a punishment for hybridising people and animals for slaves, is actually an ancient civilisation that has been found in Antarctica. This very same old city that was unearthed, and apparently once Atlantis, is linked to not only the 9/11 inside job, Hitler, the murder of Nicholas Tsar, but somehow also to the recent break in the Californian drought. The palace in this ancient city in Antarctica is also linked to a golden-lined temple in Peru which was also a kind of extra-terrestrial UN. There was also some sort of correlation with the Washington Monument and the Statue of Liberty with Tutankhamen and Nefertiti and something about egg-shaped anti-gravity crafts and LSD ships for WW2 PTSD but my absolute favourite part of the whole thing was that the reason the Nazi’s left Antarctica was because they were poisoned by polar bear meat. After I heard this I thought perhaps this guy was getting Antarctica and the Arctic confused, which could have been easy enough to do as there was just so much going on. After a while I wasn’t sure if it was even still a conspiracy theory video or an audiobook of Dan Brown’s latest work.

The trams in Zagreb have signs forbidding rollerblades on board, which means that there was a problem at one time with too many rollerblades being worn aboard trams. Fantastic.

In Zagreb I met three young guys in the main park who helped me smoke the weed I stole a few days prior. I had to get rid of it because our next stop is Germany and I’m far too anxious a person to cross a border with contraband. After a pleasant hang with my new friends, I left to wander back to my hostel, and on the way I was stopped by police. Five of them got out of their van and surrounded me. They were yelling at me in Croatian, demanding documents I didn’t have, asking me questions about where I was from and where I was staying. I showed them the only thing I had on me, which was my notebook and they read a page and scoffed, as if they even have the eye for talent. I tried to crack a few jokes but the language barrier was killing the mood. Eventually they let me go after heavy deliberation, but not after completely savaging my nerves. I’m actually kind of glad I was as baked as I was, because otherwise I would have been a shaky nervous wreck and actually seemed suspicious of something. I saw them randomly stop a few more guys and realised they must be looking for someone, because they didn’t seem to be after anything, just someone in particular. I never thought I would find myself encircled by attractive uniformed men and glad to not be the object of desire, but there we go.