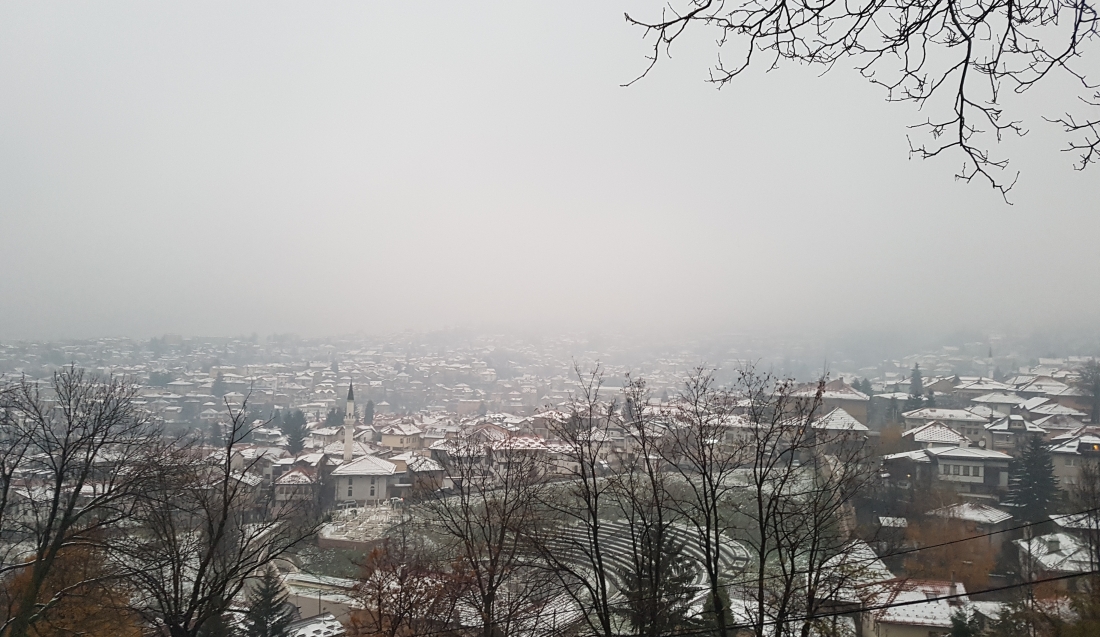 After I emerged from the bus after 29 hours I felt like a butterfly escaping the cocoon, except more like a moth and even probably more like a prolapsing organ. Sarajevo greeted me with a snowy welcome and immediately I was wide-eyed Pollyanna prancing about as the locals shot me disdainful looks while they angrily shoveled their sidewalks. I was renting an apartment and my contact was picking me up, which was great because I had no idea where anything was. Turns out he is a hot firefighter, so that didn’t hurt either. This city was immediately amazing.

Living in your own apartment is truly the life of luxury. You can eat out of the pan instead of dirtying a plate. You can eat bread from the loaf instead of slicing it up like a fool. You can sleep on whatever bunk bed you want. You never have to wear pants! I wore pants though – it was snowing outside I’m not crazy – but it’s nice to have the option.

Got hours of delight at reading the English translation of the movies on the local cinema website. Highlights included The Christmas to the Criminal Mama, and Words of the Star: a Last Eat.

So the snow managed to inform me that my shoes had worn down to the soul and were highly susceptible to filling with water very quickly. Tried to buy new shoes and for the second time on this entire trip, was laughed at for asking for a bigger size than what they had. They only go up to 45 here and going store to store asking if they stocked 47s felt like trick-or-treating in February.

I spent 45 minutes trying to find my tracksuit pants before realising I was wearing them as thermals. I spilled some ice cream on my beanie and tried to lick it off but it was covered in stupid fur from my stupid scarf and I later coughed up what I am certain was a hairball. I took an online quiz that guessed my age based on the candy I like and I got 76 so yes living alone is going really well for me thanks.

In the heart of Sarajevo, there is a market and a square and a giant chess board. I watched a game of many old men playing. It got very heated and I had no idea what they were saying but I can hands-down tell you it was the most thrilling game of chess I had ever lay witness to.

Had a brief relationship with a spambot that added me on Facebook. Here are the things I learned about him:

That he was receptive to my queries at all was a good sign, that he said his favourite activity was naps had me hook line and sinker. Except for the fact that he doesn’t seem to like music at all, I think we would have been a really good match. It’s a shame I had to report his profile and block him. It was a turbulent couple of hours that really made me realise I needed to desperately make a friend.

I had a few glasses of some rakija which as it turns out is very strong local booze because I ended up listening to Tom’s Diner on loop, downloaded an app that showed me what I would look like with different hair colour and applied for creative executive positions at animation studios I like.

The Sebilj is a famous wooden fountain in the main square of Sarajevo’s old town. For some reason it is always surrounded by pigeons, so many you can barely see the ground. If you stand there they gather at your feet and peck at your shoes. If you squint just right they look like subordinates begging for forgiveness.

There’s so much history in Sarajevo that I had no idea about and not just the recent war. A lot of it is awful, and a day in the museums is rough stuff. I found myself saying the phrase, “I can’t wait to check out the Museum of the Crimes Against Humanity!” which are words I never thought I would say.  It’s all been truly horrific to learn about but if I’m being truly honest nothing has made me as mad as all those bitches who wouldn’t dance with Dustin at the Snow Ball. It’s been weeks and I can’t stop thinking about it. Fucking bitches I’ll cut them all I swear to dog.

I got stopped on the street by a film crew. The man said they were filming interviews with people about their thoughts on the city and I had “just the face they needed”. I had just spent the last two hours looking at pictures of the bodies of children bombed and littering the streets so I guess they really wanted red-eyed and puffy but it’s like sure whatever works this is showbiz baby.

Took the long walk up to check out the abandoned Olympic bobsled course on one of the surrounding mountains. It was great and really creepy and deserted. Abandoned and war-torn buildings were all over so it feels post-apocalyptic, but with graffiti and grunge. I didn’t even need to pretend to slide down the track because the ice and my poor coordination skills worked a treat. Saw a track that veered off the road and as a long-time fan of desire paths, I took it. There wasn’t much to see except the for jarring fall of heavy snow from leaves that couldn’t bear it any longer. Eventually, I came across a pretty big dog. I assumed it was wild only because we were in a kind of wilderness, so I made sure to keep a wide berth. When more started emerging from the woods around it I decided to stop and back up. They didn’t move quickly enough to seem to want to attack me, but when they started snarling and walking toward me I climbed the first tree I could, which wasn’t easy because those damned coniferous trees have such weak lower branches. They didn’t run or attack in any way, but they gathered at the base of the tree and snarled a bit, then walked away. I waited what I thought was long enough before climbing down and getting the fuck out of there. Perhaps they weren’t even snarling, perhaps they were trying to preach the word of their lord and saviour and gave up when they got close enough to smell the sin on me.

On my descent after my run-in with the Jevohah’s Wolves, I ran into an American dude who was checking it all out as well. We walked up to two very broken stony towers and explored a little. One resembled a castle of sorts, and the other had what looked like an old stone elevator and was maybe a hotel. They were very cool. We carefully climbed to the top of the taller one, and among the incredible views of the city and the surrounding mountains and the snow that was settling in the building from the blown-in roof, there was some excellent graffiti making a joke about a glory hole and dicks and having what he’s having and anyway long story short that’s the tale of how I got a blowjob in the remains of a building overlooking the Sarajevo valley.

The ammunition shell is apparently the unofficial symbol of Sarajevo. I was told that during the war the streets were lined with hundreds of shells every day and the locals would gather them, and now they are turned into pens and other items for sale, which is possibly my favourite example of making lemonade from lemons.

The crows over here are very elegant. They look like normal crows except they have a stylish grey plumage on their torso, giving them the impression of wearing the fur of the last beast they slayed.

My apartment is in a family complex, the mother, father, and their adult children live there. I was there for about 5 days before I saw anyone other than the hot fireman who picked me up. On Sunday night he knocked on my door with a plate of Nutella pancakes for me. After I regained consciousness from that moment, I followed his invitation to join him and his friends for shisha. His sister came down too and upon realising I was there, immediately went upstairs to collect food for me, coming back with a feast of Bosnian grub. She looked so much like Scarlet Johansson I had to keep double taking, and between her and her fireman brother I’d say the parents have clearly hit the golden gene pool. On the TV we watched a local reality show where apparently people perform songs as other famous people, and the title translates to something like, “You Have a Similar Face”. I had no idea what was going on but I was told the older woman who looked as if that tight pink dress was the only thing holding her upright, was a former Yugoslavian pop star and now she was a junkie who was kicked out of her tent. I can’t be certain if they were taking the piss in explaining this to me or if this was true because to be honest, I could believe it. I ate myself to death, enjoyed guava flavoured shisha and laughed with these people, who were all younger than me, while trying to make sense of a reality show with a cardboard cut-out judge. There was no depravity at all in that room, I mean, we drank soft drink. It was just so wholesome. I couldn’t help but think the Aussie version of this scenario would be kind of the same, except instead of all of that there would be a bong made out of a Dare bottle and cut off hose, The Bachelor, maccas and a coffee table of empty tinnies. I kind of like this one better. The weirdest part was that for me this would be one of my favourite nights ever, but for them it was just a regular Sunday.