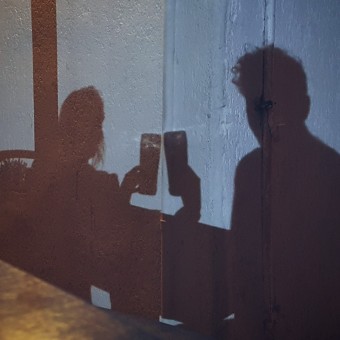 This was the last week Rachel and I would be together, for after Amsterdam we split and go our separate ways. Travelling around Europe together for two months seemed a pretty good last hurrah for us both as we start anew. I had to stop prancing about and settle and work. Europe ain’t cheap anymore.

An old couple in the Aleppo Room in the Pergamon Museum had a loud and heated argument over whether the device sitting in the corner of the display was a humidifier or a seismograph. It was such a beautiful setting for something so inane.

I spent five minutes trying to eat a weird piece of lettuce before realising it was paper.

A shitty street magician tried to woo the unimpressed crowd by making racist jokes and telling dogs to shut the fuck up. A crowd hasn’t turned faster than when Bob Dylan etc etc.

I don’t know if it was intentional or not, but I think that the way the Gay Holocaust Memorial is located in a park and also from a distance looks like a glory-hole, is absolutely beautiful.

While waiting in line at Berghain, you can’t talk to each other and you must appear very serious. I tried to pass the time by reading the graffiti but got stuck on the delightful but frustrating “your’e” that had been plastered over the entrance. Getting inside felt like a job you wanted but were desperately underqualified for and by the time I had somehow been granted access, I was already sweating. Inside was a dank pit of depravity and I swear to dog I have never felt more at home. I danced for 9 hours and got vomited on and made out with a local. As my broken body stumbled out of there sometime the next day, I felt like Dorothy awaking from Oz and back to boring black and white.

On our last night in Berlin I got a message about how the city had been declared a state of emergency. I recalled it being breezy out, but I’m guessing the expected storm had passed us. I felt envious of the destruction I was denied.

The bells of Amsterdam periodically play songs which is great, because I was waiting for Que Sera Sera to be stuck in my head.

A smiley but wasted dude on the tram blew kisses to everyone as he disembarked, including the inspector, and it wasn’t even creepy.

I got into a heated argument with a coat check chick at the Van Gogh museum over whether or not I had been given a ticket for my jacket (I hadn’t). She was increasingly rude and stubborn and audibly yelling at me in front of the entire foyer of people. As I left I was supposed to rate the experience, and too scared for more vilification I gave it 5.

There are so many bikes in Amsterdam, it’s hard to really grasp. I walked around asking myself; where do the people go? The bikes shall rule supreme and the unworthy pedestrians shall fall.

The hostel we were staying in seemed to be hosting some kind of seminar. Rachel tried to steal coffee from the group in the cafeteria but she got caught and refused, probably because she is a young person in a purple coat and not a sadly dressed middle aged seminar woman.

On our last night together Rachel and I decided to buy a joint and get stoned together. It took us both by surprise how strong it was, and as we robotically walked back inside to our dorm, I’m sure we looked it. We bought snacks from the vending machine and watched TV on our laptops, silently giggling away into the night. It seemed a fitting end to our time together, as the past 6 years or so we’ve lived together, through thick and thin, TV was always there for us. It felt weird waking up and being alone for the first time. I guess this is it now. To comfort myself I walked around the canals of Amsterdam, finishing off the previous night’s joint, listening to Tina Arena and dodging bicycles. I don’t know why, but it just seemed like the thing to do.